I’ve played a lot of basketball over the years, and during that time I’ve been part of many wins and loses.

Often the losses that hurt the most are the close ones. The ones where we gave up a lead in the last seconds, or the ones where we made a run that just felt short. For those games, I can still remember some of those closing moments. I can remember the mistakes made either by myself or other teammates, and I can remember the feelings of loss and disappointment that came with it.

When you lose like that, it’s easy to look for what “cost you” the game. And often the things you remember are the mistakes made in those final moments, when it all fell apart.

The thing is, those mistakes are really just the last mistakes. The final ones. They may hurt the most, but in a close game they were never the deciding factors.
Basketball is a game with many possessions. And with all these possessions one of the things that often gets lost is this – every moment you are on the court, whether you are looking to score or looking to defend, you are influencing the outcome of a game.

The final score is really just the sum of all the decisions made in the whole game. Positive or negative, each one counts.

So in a close loss, was a missed shot at the end of the game really more important than a miss that happened at the beginning?

The final mistake often takes on more meaning because you know time is running out. When you are down two points with thirteen seconds left, you can feel the weight of your decisions in those seconds. You know this is your last chance.

If you are down two with six minutes left, it doesn’t seem as real, or as immediate. You can tell yourself “there’s still time”. And one unfortunate side effect of feeling there’s still time is a tendency not to take those early mistakes seriously, and to treat them like they aren’t as important as the later ones.

But no game is ever won or lost in the last moments. And on a team, no one member is ever entirely at fault.

Breaking Down Over Time

Often when relationships either struggle or fail, there are strong feelings of loss and disappointment. So we search for answers.

In those moments it’s easy to focus on the latest mistakes. With the immediacy of “the game running out”, they often take on greater meaning for us. But although the final mistakes can be big ones, with people checking out emotionally, and displaying selfish and destructive behaviors, no relationship fails due to the final mistakes.

Like the stone-cutter hammering away at a rock, the final mistake seems to be the one that causes a relationship to fail. But the failure was being built in slowly, with hundreds of little decisions and mistakes over time. All the little times someone was hurt, or didn’t feel valued or appreciated. Taken individually these instances may seems small, but when you add them all up, the relationship has really suffered death from a thousand cuts.

It’s important to understand that for good or for bad you are influencing your relationship every single moment.

When relationships fail, it’s usually due to years of little problems and neglect, combined with poor communication leading to resentment. When this happens, instead of being a place of safety and security relationships become sources of tension and struggles for control.

Sometimes I read other blogs, and I hear people talk about withholding things from their partner. Whether conscious or subconsciously, this is a passive aggressive form of punishment. Sex is a big one, but often kindness, caring and even basic signs of affection and respect are held back.

At some level I understand this. When you are upset with your partner, you probably aren’t feeling loving or affectionate. But at the same time, when this happens I mourn for the people involved. Withholding is a form of control, and love and control do not go together. When a relationship hits this point, it seems it’s just waiting for that final mistake. And that final mistake will not be the one that caused the failure.

Thankfully, while a series of mistakes over time will cause anything to break, the opposite is also true. The initial bond of a relationship may be forged in the years when you are first getting to know one another, but to keep that relationship strong you have to work at it and maintain it over time.

In one of my favorite posts I talk about using this idea that every single decision matters, and applying it in a more positive way. If you truly want your relationship to last forever, it doesn’t just happen. You need to work forever into your life with the actions you take each and every day. 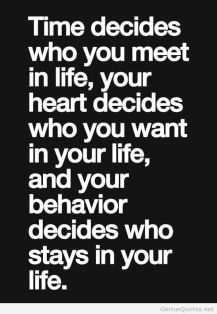 Behaviour. Decisions. These are choices that we make.

Don’t wait until your relationship is in the brink before you start fighting for it. Fight for it by not letting the little things go unsaid. Fight for it be accepting that no matter where things are, they can always get better. Fight for it by trying to let go instead of holding onto hurts and withholding affection. Fight for it with consistent effort, each and every day.

And it’s up to you to decide what you want to do with them.

17 thoughts on “The Last Mistake”