There’s a couple, who love each other; but one day they realize they are having problems.  Or maybe they aren’t even having problems, and instead they find themselves thinking that maybe there should be more to life.

Whatever is going on starts to put stress on their relationship, and they are starting to question if they really want this relationship any more.  Or maybe they know they still want the relationships, but not as it currently is.  They want to see some sort of changes that they believe will improve the relationship.

So, either because they think it may help or because other people are suggesting it is a good idea, they decide to see the help of a couples counselor.

I don’t have any real hard numbers here, but from what I’ve seen only around 10% of couples show any sort of improvements in their relationship after seeing a counselor.  And for people who choose to see a counselor, around 50% of the relationships end up failing.

That 50% number is right in line with overall divorce rates, so really, what’s the point.  If seeing a counselor doesn’t really improve the success rate of relationships, it looks like it’s just a waste of time and money.

Is counselling nothing more than a waste of time and effort?  Or can it actually help relationships?

I happen to believe counselling CAN be very valuable – both individually and as a couple.  But you need to be doing it for the right reasons, and you need to go in with the right mindset.

The first big problem with counselling is, couples often go to a counselor WAY too late.  In fact, many counselors feel that a couple has gone to see them a year or two later than they probably should have.

In many ways this is understandable.  Our personal issues are, well, personal.  Communication is hard at the best of times, which probably the biggest reason that couples get into trouble in the first place.  Yet couples who are struggling with some sort of issues are supposed to now go to see some third party (with their partner) and talk to them about the exact issues they find it hard to talk to their partner about?

Ummm, yeah.  Not fun, or easy.  So it’s easy to see why people often opt to instead do nothing, and hope that this is something that will pass, or something they can just live with.

Except it doesn’t work that way. Ignoring things doesn’t work, and will never make things better.

As the saying goes: 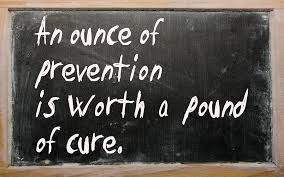 Yet most couples see counselling a last resort, so what may have been fairly manageable issues tend to grow and become magnified.  Resentment often sets in, and by the time people are willing to accept that it’s a big enough problem that they need to do something, there is a lot of damage that needs to be undone before any true improvements can be made.

Another big problem with counseling is, in order for it to be effective BOTH people must want it, and see a need for it.  Unfortunately relationship issues often don’t work that way.

Commonly one person is actually pretty happy (or at least content) with the things that are a problem for the other person.  This can make it very difficult to see any real improvements, because the person who wants to see changes needs to get buy-in from someone who doesn’t see a need for any changes.

An important thing to remember is, a relationship involves two people and both peoples needs/wants have to matter.  If one person believes there is a problem (lets just call it an opportunity for improvement) – then guess what, there’s a problem.  The other person who doesn’t really see this as an issue can’t just convince their partner it’s not an issue, or wish it away.  Whether they like it or not, if their partner believes there is an issue then there’s a legitimate issue.

In fact, one of the WORST things they can do is try to convince their partner it’s not an issue.  By doing that, they are invalidating their partners’ feelings and beliefs (hopefully unintentionally).  And doing that will only serve to widen any gaps between a couple.

What is your Goal?

The last (and largest) problem I see with counselling is the reason people go.

But if a couple is talking about going to counselling, generally there is a reason.  Something is not working, or could be working better.

And how is that supposed to happen without change?

I’m pretty sure a couple doesn’t expect to go to a counselor, describe their issues, and then have the counselor say something like “Sounds great, keep doing what you’ve been doing”.  That won’t address anything.  That won’t allow anything to improve.

No, couples go to counseling usually because one person is pushing them there, and on at least some level the person pushing for counseling is expecting the counselor to side with them.

And that is where I think counselling really starts to fall apart; because that’s not what it’s for.

To me, counseling is not about determining who’s right or wrong.  It’s not about having one person change their behavior to accommodate the other person.

It’s really about trying to understand the conflicts facing a couple, the gaps between their needs and wants, and trying to find a path forward works best for BOTH people.

And that will almost never involve change on only one side.

For counseling to be successful, I think both people need to be willing to face some potentially uncomfortable truths about themselves, and their roles in the problems their relationship faces.  Yeah, one person may be “more to blame” than the other, but that doesn’t really matter.  If you are looking for who’s to blame, you’re already in trouble.

It’s easy to see how and why our partners should change to accommodate us, but looking at our own part in things?  That’s hard.  It means we may have to change some things too, and no one wants to change – because change is scary as hell.

If we buy a car, we understand we need to do periodic maintenance or it will break down (seriously, just try driving your car and never changing the oil.  I promise it won’t be fun).  If we buy a house we understand there is yard maintenance that needs to be done and general repair.

Hell, we understand that doing something like taking a bath or a shower on a regular basis is fairly important to personal hygiene.

Everything wears out, gets dirty or breaks down over time if you don’t maintain it.  But our relationships?  In theory they should be one of the most important things in our lives – yet most of us do a TERRIBLE job of even maintaining them (never mind growing them).

Counselling is often seen as a last resort for couples who are searching for how to “save” their relationship, or make it better.  And often even when we do go, it’s more about how we can make the relationship better for us than it is about how to make life better as a couple.

So what is your goal?  Do you truly want to grow old with your partner?  If so, wouldn’t it maybe be a good idea to try and make your relationship the best it can be – for both of you?

If so, putting in effort and working on your relationship a little be every day may go a long way towards keeping it strong.  Trying to truly listen to your partner, and acknowledge when problems exist (even when it doesn’t seem like a problem for you) and show willingness to work on them may also help.

Sometimes it’s hard to work through things together.  Sometimes we do need a bit of help – and that shouldn’t be something to be embarrassed about or ashamed of.

Divorce rates continue to hover around 50%.  And success rates for couples who seek counselling are also believed to be around 50%.

But if you could quantify the success rates for couples who are able to put ego aside and really focus on doing what’s best for “us” instead of what’s best for “me”, I’m confident the numbers would be considerably higher.

16 thoughts on “Why Counselling Fails”