When I was a kid I used to read comics, and although I didn’t read it on a regular basis I always enjoyed a series called “What If”.

The premise of the series was great. Comics have their own history and continuity, so the “What if” series was a way to explore alternatives to that history. It allowed writers to imagine how the current comic world would look if just one event happened differently, or one decision was made differently.

For example, the Hulk is the typical Dr. Jekyll and Mr. Hyde story. He’s a brilliant scientist to transforms into a powerful yet relatively mindless creature. What would happen if he could maintain his brilliant mind while adding the power of the Hulk? How would that change that character, as well as the universe he lives in? 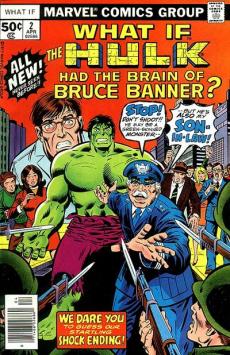 These stories imagining alternate realities in the world of comics were usually fairly silly and often a lot of fun.

I think in some capacity, we all play the “what if” game with our own lives. What if we had made a certain decision differently, or what if one event happened differently.

What would it mean to us today?

How would it impact our lives?

Usually if we are having these thoughts, it’s because something about how are lives are “today” hasn’t worked out quite the way we thought it would. After all, there’s not a lot of need to look back and imagine what things would be like if you are happy with where you are now.

I recently saw the Disney/Pixar movie Inside Out (great film by the way), and there is bit about this thinking that becomes a recurring joke. There’s a scene where a family is having dinner and the mom is concerned about how their daughter has been behaving. She turns to her husband for support with their daughter, and is disappointed by how he handles things. In her disappointment, she has a memory about a Brazilian helicopter pilot who appears to be straight out of a romance novel.

At the moment the mom seems to be thinking, “I chose you when I could have had him”.

As comedy relief, it was a funny scene.

But really, “what if” is a very destructive form of thought.

I know, I know.  It’s a cartoon.  But we all think this way from time to time.

I’ve imagined, what if I stuck with drawing?  What if I started playing basketball at an earlier age?  What if I would have been willing to leave town to go to school?

There are always “what if’s”.  Truly though, they don’t matter.

Sure, maybe X or Y would have happened if you had made certain choices differently, or if events had worked out differently.

But they didn’t.  Where you are today is where you are.  And the past can’t change that, only the future can.

“What if” is a waste of time, and it can cripple people. It can not only trap you in re-examing past decisions, but it can also prevent moving forward with current decisions. After all, if you are ruminating over past decisions what if your next decision doesn’t turn out the way you want?

What really matters is where we are today, and what we are going to do with our present state.

Are you happy with where you are, and is your level of happiness enough? There are so many different aspects to life that I don’t believe anyone will ever be totally happy, and that’s alright. Are you content though?

If not, what are you doing about it?

I truly believe that is what life is really about. Making decisions, and then doing the best with the decision you have made. If you aren’t happy, change your situation.

And accept that no matter what road you have taken in the past, or whatever road you take in the future, there WILL be surprises. There WILL be disappointments. Things aren’t going to work out exactly the way you had planned, and that’s alright.

We adapt, we adjust, and we keep going.