Do you love yourself?

As I’ve learned more about interpersonal dynamics and relationships, I’ve come to the conclusion that there are three things which significantly impact a persons ability to have a happy relationship.

Of these, the ability to love ourselves is THE most important. And I suspect it’s related to the other two. If you don’t love yourself, you are less inclined to let your partner in. After all, if you don’t like you, and your partner were to see you as you see yourself, then perhaps they wouldn’t accept you or love you either. So why would you let them in? Instead people build facades and present the version of themself they believe their partner wants.

The problem is, when they do this they aren’t being authentic or true to themselves, and over time this will invariably lead to unhappiness (and potentially resentment).

What exactly does it mean to say you “love yourself”? At it’s core, I think self-love is about acceptance. You accept yourself for who you are. That doesn’t mean you can’t change, and can’t improve. You definitely can. It simply means that you don’t believe you have to as you are fine the way you are. Self-love means you believe in yourself and the person you are. You have self-confidence, and a positive self-image.

This is not to be mistaken with arrogance, of being cocky. It also is not “self-love” in a narcissistic way. Loving yourself is healthy. Being in love with yourself of being full of yourself is not healthy.

Self-love doesn’t require external validation, as it comes from within.

A Point of Reference

So I’ll ask again, do you love yourself? This can be a difficult question to answer.

A few years ago I went on a trip with a buddy and we shared a hotel room. Going in I knew he snored, but I had no idea how bad it was. His snoring kept me up at night, but worse than the snoring was the fact that it was broken up by long stretches where it seemed like he stopped breathing. After seconds (that felt like minutes) there were large gasps for air, and he would start snoring again.

I’m no doctor, but it was pretty alarming. I told my buddy that he should get it checked out and he insisted he was fine. I asked him if he always found himself tired or rundown, and he said no (even though he fell asleep when he was supposed to be navigating for me on the trip. Very helpful). To him, he was perfectly fine.

A while later I related this story to a co-worker who has sleep apnea, and he told me that it sounded familiar. When I mentioned that the guy insisted he was fine, my co-worker laughed and said that’s because it’s his normal state. He’s always tired, he’s always exhausted. And because of that he doesn’t understand how it feels to be rested.

He believes he’s not tired because he has no point of reference to compare himself to.

I see self-love as being similar. It’s not something you “know”. Sometimes people believe that they love themselves when they really don’t. We can’t get into other people’s heads, so if you have negative thoughts about yourself then you might think it’s normal. After all, it’s what you know.

Incidentally it’s been almost two years since that trip, and my buddy STILL hasn’t seen a doctor (and of course insists he’s fine). He’s not. Sadly the people who need the most help are often the last ones to see it as to them it’s just “the way they are”.

Signs You Don’t Love Yourself

To help understand self-love, let’s start with a looks at some signs and characteristics of people who don’t love themselves.

It’s normal to feel all of these things occasionally. But when they are a pattern of thinking for you, then they are signs that you may not love yourself.

Signs You Do Love Yourself

So what do people who DO love themselves look like? The easy answer is, the opposite of the above characteristics. But as I mentioned earlier, if someone truly loves themselves (and has self acceptance) then it’s not easy to see.

One characteristic is that they tend to have a sense of calm. They are comfortable with who they are, and in their own skin.

They aren’t perfect, and they both know and accept that. They are also able to handle criticism fairly well, as they realize it’s not a reflection on them.

People who loves themselves tend to have a sense of personal accountability and a belief that they have control over their own lives.

They also can look at themselves naked in the mirror without thinking *too many* negative thoughts (regardless of body type).

One of the big problems with self-love is that it has to come from within. However, for people who don’t love themselves they often don’t see that. They know there is something wrong, but they can’t identify what it is. Because they don’t understand (or won’t accept) that the issues comes from within they start looking outside of themselves.

When acceptance and self-worth doesn’t come from within, they start looking for external validation. The problem is, validation from outside will never be enough. 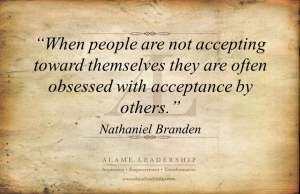 Everyone enjoys being complimented – it feels good to know that someone finds you attractive, or thinks you are good at something. But for people who stuggle with self love, often compliments are needed. But all the compliments in the world won’t help. If someone doesn’t believe it themselves that self-doubt shows through, and there is a continuous need for external validation.

This can result in all sorts of messed up behavior.

I’ll be the first to admit, I don’t understand what it’s like to not love yourself. I’ve tried, but I can’t. Loving myself is just part of who I am. See, I like me. I don’t think I’m cocky or arrogant, but I am confident in myself. Most importantly, I know I’m in control of my own life. Things don’t always work out, but they often do. And when things don’t I can always adjust accordingly and find a new path. I make decisions, and they may not always be the right ones. But that’s fine, because they seemed right at the time. When I screw up I try to use it as a learning experience, and a way to do better “next time”.

Understanding what it’s like to not love yourself is as foreign to me as it is to understand what it’s like to be a woman on her period. As a guy, it’s impossible for me to understand that. Yeah, I know the biology – the lining of the uterine wall has thickened in preparation of a fertilized egg, it doesn’t happen so the extra stuff (pretty sure that’s the scientific term) breaks down and is released. It’s accompanied by hormonal changes that can impact mood and how someone feels. Intellectually I get it (kind of). But I don’t understand, and I never will.

This lack of understanding is often referred to as an explanatory gap. Understanding the mechanics of something doesn’t mean I can understand how it feels. In the case of a menstrual cycle, I’m fairly confident I will never understand that. Likewise for self-love.

So to help me understand this a bit better and start to close that explanatory gap I turned to a buddy who has lived this. Someone who has been through the fires, and come out a stronger person for it. We’ll call him Gandalf (as his experiences have made him quite wise).

Because I believe self-love is an important component of happy relationships I had the idea that he could help me understand the mindset a bit better.

When I first approached him on the idea the exchange went something like this:

Me: I’m thinking about writing on self-love, and thought you might be able to help me with a post.
Gandalf: Errr, me? Self-love? Umm, how do you know… (starts blushing and looking at his feet)
Me: Huh? Oooohhh. Dude, I’m talking about self-love, as in “do you love yourself”. Not self-pleasuring!!!
*Awkward silence *
Gandalf: So, how about that ball game last night…

Alright, that never happened. Well in my head it did, and it make me laugh. And since it’s a fairly serious topic I figured it would be good to start with at least a smile.

My buddy Gandalf was unhappy for a longtime and he spent years blaming his unhappiness on everything around him, pushing away the people who loved him the most in the process. He eventually had a breakdown that led to him being diagnosed with an anxiety disorder that led to him falling into clinical depression.

Anxiety disorders are the most common form of mental disorder, and there is a strong correlation between anxiety and a lack of self-love. In the grips of anxiety, my buddy hated himself and it almost destroyed his life. But instead of accepting that this was just “the way he was” and allowing his anxiety to control him, my buddy decided to educate himself, learn as much as he could about it and try to regain control of his life.

Over the next few posts I will be doing something a little different. He will be my co-author, sharing his story. I think his story is at once fascinating and inspiring. Whether you love yourself or not, his experiences are ones that I believe we can all learn from.

22 thoughts on “Do You Love Yourself?”