I’ve got a buddy who drives me a bit crazy.  He’s a great guy, he really is; and I love him to death.

Thing is, he also happens to be a bit of a slob.

Not a slob in terms of his appearance or anything.  But, well…

And where you see it the most is he almost never cleans up after himself.  I mean, the dude will eat his food and just walk away, leaving his plate behind.

Not taking it the 10 steps to the sink.  Not putting it in the dishwasher.

He just leaves it.

I don’t have to live with the guy, so I guess it really shouldn’t bother me.  But it still kinda does.

I like things to be fairly tidy; and seeing plates sitting around with leftover bits of food?  Well, that’s pretty gross.

Let me ask you a question – do you like paying bills?  It doesn’t matter which type of bill.  It could be mortgage, utilities, credit card, or any bill really.

Unless you’re weird, the answer is probably no, you don’t like paying them (and if you DO, I have a bunch that you can pay if you want).  Nah, we pay our bills because we have to.  Paying the mortgage is preferable to having the house repossessed.  Paying the utilities is better than having them cut off.  If we want the thing the bill is for, we have to pay it.

But what if you didn’t?

What if you got that bill in the mail and you never had to pay it.  What if it just paid itself?

Rather, you would probably think it was pretty awesome.

Maybe the first time the bill “paid itself” you would wonder how/why it was paid.  If it was a mistake you may contact the electrical company and let them know, or you may just hope they wouldn’t notice.  And if someone paid it for you, you would probably be thankful.

Thing is, over time if they just continued to pay it and you never had to you would probably start to expect it.  And eventually you would take it for granted.

So, back to my buddy…

He doesn’t clean up after himself, and in all the years I’ve known him he’s never had to.  He doesn’t seem to even think about it, because he gets away with it.

It’s frustrating to me, but I think it’s also human nature.

No one wants to feel like a parent to their partner.  We don’t want to feel like we are nagging them.  We want our partners to do things because they are showing consideration to us and because they recognize it’s the right thing to do, not because they have to.  But at the same time, it’s human nature to do the least amount possible.

So looking at my buddy, yes he needs to own his behaviors.  Yes it’s his “fault”.

But it’s also the fault of the person who enables him to do it.

Bear with me a moment here…

When “bad things” happen to us or we are hurt by the people we care about, we often struggle to understand things like how could they do that to me?  How could they hurt me?  Don’t they care?

The focus is on what has happened to us.  And when we are hurt, it’s easy and even sensible to blame the person who hurt us.

The harder question is what did you do to contribute to the situation?

This isn’t a popular question, especially when people are hurting.  And in asking it in the past, I’ve even been accused of victim blaming.  I don’t see it that way though.

Trying to understand how you have contributed to something is not the same as taking blame for it.  People are responsible for their own choices and behaviors.

I am never *responsible* for someone else’s choices.  That’s on them.

So when someone has done something, whatever it is, it was their choice.

However that doesn’t mean I haven’t contributed to the situation in some way.

Let’s say your relationship is breaking down – does it really matter who’s fault it is?

I don’t think so.

Ultimately you have no control over what the other person has done.  The only thing you have control over is you.  Your actions, your response.

The only thing you can actually change is your part in things.

So be willing to recognize and own your own part.  Owning your part is very different from taking the blame for someone elses part.  That’s on them, and only they can own it.

Some people won’t own their own part.  Instead, they will blame others for their own actions and their own choices.  Saying things like “you made me do this”, or “I did this because you did that”.

When we blame others for the bad things in our life (and ignore our own part in things), what are we doing?

We are making ourselves victims.

And we are giving that other person control over us.

That doesn’t help us at all – blaming others keeps us trapped, or at least makes us feel trapped; when in reality we always have choices.

Even if our only choice sometimes is to walk away.

We don’t grow when things are easy, and when our life is going down the happy path.

It means we are accepting that our choices are our own, taking ownership of those choices, and realizing we have the power to make different choices in the future.

It means seeing how we may have contributed to the situations we are in, and looking for ways that we can change that moving forward.

Facing our own role in things is difficult.  It forces us to take a long hard look at ourselves, and sometimes what we see will make us uncomfortable.

This isn’t a bad thing though.  Rather, being uncomfortable with something about ourselves is often a sign that we’re on the right track.

And it’s a sign that we are ready to grow. 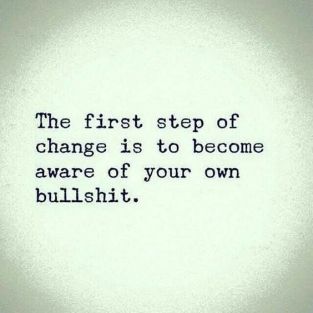 11 thoughts on “Owning our Part”