Recently I was nominated for “The Leibster Award” by a fellow blogger, KnightHearth (great blog, I encourage you to check out). 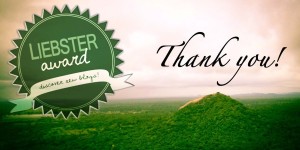 My last few posts have been a bit on the serious side, and this seems like a great opportunity to decompress for a moment and talk about something a bit lighter before delving back into the world of relationships and all the fun that comes with them.

As a side note, I want to extend a HUGE thank you to my buddy Gandalf for allowing me into his head and thoughts on some very personal and serious issues. I think self-love, and negative coping mechanisms are topics that are pretty important, but woefully ignored.

In any case, it’s always flattering to receive any sort of award but I haven’t been sure what to do about it. I have a personal policy against chain letters that goes back to the days of snail mail and has continued into the world of social media. Any time I hear/read “and you need to send this to X number of people” I usually automatically disengage my brain and move on. Some people love that stuff and that’s fine, but it’s not my thing (and in computer world it’s often one of the fastest ways to get your system infected with a virus).

So when I received this nomination I appreciated it, but I was on the verge of sending a polite response along the lines of “thanks for the nomination but I don’t do this”.

Then I got thinking, these award nominations aren’t really like a chain letter. Chain letters serve no purpose, but this actually does. The purpose of the Liebster Award is to recognize up-and-coming new bloggers, bring exposure to them, and encourage a bit of networking in the blog community.

Pretty much anyone who is blogging does it because they have found something they are passionate about, and people put a lot of thought and effort behind their posts (usually). We do it because we enjoy it, but whether your audience is 1 or 1000, I’m sure there’s a part of all of us that wishes we were reaching a wider audience.

So the real purpose of these awards is a way for us to provide a personal recommendation to our peers, letting them know we like the work they are doing, and potentially steering a few new readers their way. And that’s something I can get behind. Bringing new people to our blogs is never a bad thing. Maybe people will find it’s not for them and move on, but maybe something will resonate with them and they will stick around for a while.

With that said, on to the questions…

1. If you could’ve chosen your own name at birth, what would it be?
Hmm, honestly I don’t know. To me a name is just a name. I associate my name with me, and I like me, so I think I’ll have to keep it. Though to make it a bit cooler I might say it with some sort of an accent. After all, accents always make things cooler.

2. Name one truly weird thing about yourself (you know it’s weird, your friends know it’s weird, just give it up):
Well, this one ties nicely into the next question. For a number of years I collected toys (I would use the preferred term of “adult collectibles”, but that has different connotations so it’s probably best to steer clear of that).

I’ve pretty much gotten out of it and have sold off a fair bit, but my office contains an assortment of toys and collectibles – mostly super hero related. I’m not quite the comic book shop guy from the Simpsons, but my sons understand that daddy’s toys are for display, and are not to be played with.

When I look at the stuff I have and I mentally tabulate what I’ve spent over the years, I can think of about million better ways to spend that money. So yeah, I think that qualifies as weird.

Now, I’ve got to go with Batman. Yeah, he’s everywhere these days – but that’s because he’s cool. I have to admit to some apprehension about the new movie with Ben Affleck in the leading role. It could be good, or it could be Joel Schumacher level bad. I’ll remain cautiously optimistic for now.

4. What’s the best and/or worst thing about blogging you’ve encountered so far?
Best thing – a community of people who are sharing all sorts of things. The quality and quantity of what you find in the blogsphere is impressive. Through it I have met (virtually of course) a handful of people whose thoughts and opinions I have come to look forward to.

Worst thing – as a believer in long term relationships and commitment, it has to be the number of blogs I have read where people talk about and somewhat glorify infidelity. And what’s worse, many of the commenters I see advise people who are thinking of affairs to go for it, saying things like “follow your heart”, or “life is too short”. Not cool. We seem to live in an instant gratification world, and I know relationships can be hard at times. But it makes me sad when I see how many people would rather follow short term happiness over building a solid foundation for a sustainable relationship and future.

6. If money was no object, what’s the first thing you would do right now?
Young children would cause logistical issues – but it would probably involve jumping on a plane to places yet to be determined. My bucket list generally revolves around seeing and experiencing different places and cultures, and I would love to start experiencing more of the world.

7. What’s the most difficult lesson you’ve ever had to learn?
That when you truly love someone, you have to be willing to let them go. No matter how much you may care, and no matter how much you may want to, you can’t really help other people. You can try to support and try to guide them, but ultimately everyone needs to find their own path. Sometimes that path isn’t the one you hoped for, but it’s their path, not yours.

8. What has been the greatest influence (person? event?) on who you are today?
There have been a number of people who have influenced me, but I’ll have to give this one to my maternal grandmother. She was a unique lady, and in many ways was just as much of a friend as a grandmother. We would sit and talk while playing cards, and I could tell her absolutely anything. She always made me feel valued, and she accepted me as I was.

One of my favorite stories from her was how she would ask her dad for advice when she was younger, and his response to her was always “I know what I think, but what do you think?” That was grandma, and she is definitely missed.

Going back to question 2 (me + weird = toy collecting), after Grandma died I inherited two curio cabinets that she had assorted ornaments in. Guess whats in them? Yup, super hero adult collectibles (fine, they are action figures).

9. All things being possible, what’s the #1 world-wide change you would make? (come on, be honest; this isn’t a beauty pageant)
Well, if you read my blog at all then the answer should be obvious. For people to be able to take a long term view of life and take care of their relationships.

I think far too many relationships fail because people start focusing just on themselves. Successful relationships are about more than you – they are about “we”, and a bit more empathy would go a long way to making the world a better place.

10. What do you think is the most awesome thing about this world we share and why?
VERY tough question, but I’ve got to go with tuna nigiri sushi. It was either that or my family, but when you have the right amount of wasabi the tuna ultimately wins out. I honestly can’t even understand how I lived the first 20+ years of my life without it.

My nominations (in no order) are:

The guidelines to accept nomination of a Liebster Award are:

My questions for the nominees (should they choose to accept) are as follows:

BTW, I really only had 6 so I “borrowed” the last 4. Bonus points if you know from where.

3 thoughts on “And The Award Goes To…”