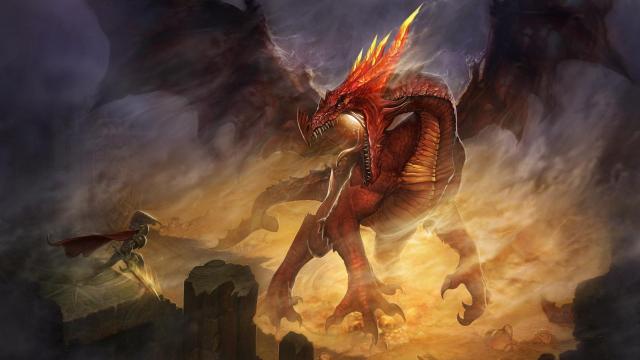 Growing up I read a lot of books, and my genre of choice was fantasy.

Castles, knights, dragons, elves, dwarves, creatures like trolls/orcs/goblins etc; quests for mystical objects to save the world from some impending doom or evil.

I love that stuff.

For me, the fantasy genre was a way to escape into a world that was completely different from the one I knew.  There was nobility, intrigue, betrayal, redemption.  And there was usually the romantic notion of good triumphing over evil.

In the fantasy world, everything people did had a purpose.  You don’t see a lot of people doing things like eating, going to the bathroom, cleaning up the yard, or paying the bills.  They don’t even really talk about their day.  But when they do, it’s known as “character development”.

In the world of fantasy, things are always exciting!!!

(Alright, I know.  In Lord of the Rings the characters do a lot of walking.  And I mean A LOT.  But hey, they had to cross all of Middle Earth and it’s not like they had cars or anything.  So even all that walking was done with a noble purpose in mind).

The main draw of the fantasy world is, it’s just that.  Fantasy.  It’s not real.  It’s an escape.

When we read about knights and dragons, it’s pretty clear that this is just a make believe world.  Same as the world of superheroes, science fiction, and Disney princesses.

It’s less clear when the fantasy world more closely resembles that of real life.  TV shows, movies, books.  Often they are set in “the real world”, but they are just as separated from real life as the world of Fantasy.

And problems can occur when fantasy starts to interfere with real life.

I write about relationships, and with that I truly believe in love, romance, and all the stuff that comes with that.

But I completely reject the way love is often portrayed.

True love.  The One.  Two people’s eyes meeting across a crowded room, and they know they will be together forever.

Don’t get me wrong.  I’m a romantic so I understand the appeal of that stuff.  But it’s a load of crap, and I think it does a lot of damage to people’s understandings of real, healthy relationships. 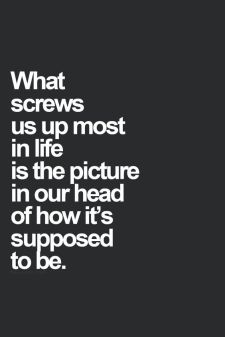 Let’s look at dating, and love.

Love is supposed to be altruistic.  It’s about genuinely caring about another person, and being able to (at times) put their needs and wants first.  It’s about being part of something that’s bigger than you.

In the dating world on the other hand, you see a selfish form of love.  When you first meet someone, do you REALLY care about them?  Umm, no.  Dating is primarily about what YOU want, and how you can find someone who will be able to satisfy YOUR needs and wants.  Sure, you give to the other person.  But that giving isn’t done freely, it’s done because of what we get out of it.  Either it makes us feel good to give, or we are expecting something in return.

In the dating world, you (usually) aren’t even YOU.  Instead, you are portraying a version of you.  And usually, you are putting forth what you believe to be the best version of you, or the version that you think the other person will be most interested in.

And the other person is doing the same.

You are exchanging carefully constructed facades, which have elements of the “real people” underneath.  But there is a lot that is left hidden, or unsaid.

Dating may have elements of a deeper relationship.  But like Fantasy it’s only a part of it, it’s not based on reality.

In a perfect world, as you get to know each other better you come to value the other person as more than just a vehicle for your needs.  You come to understand them, and genuinely care about them.  And eventually, you start to think of the relationship with them as something larger than use yourself.  You are contributing to something, and building something.  You are still “you”, but you are now also part of an “us”.

Romance stories and movies usually depict the early stages of relationships.  The excitement, the passion and the romance.  And often they end with the couple finally “making it” (usually after going their separate ways after a misunderstanding, and then at the last minute realizing they do belong together after all).

Romance stories usually end with the wedding.  Really though, that’s where “easy” stops and the real work begins.

When Life Gets in the Way

Life is mostly routine.  We work, pay bills, shop for groceries, prepare meals, do yard work, etc.  All of this is stuff we “have” to do, and there’s nothing particularly exciting or romantic about it.  But really, this is where most of our energy gets spent.  Add kids to the mix, and often it seems there’s little time left to focus on being lovers and being a couple.  So people settle into patterns, and what may have started as passionate love becomes a love based more on comfort and familiarity.

Love based on comfort and familiarity isn’t a bad thing.  At the same time though, romance doesn’t have to die.  In fact, it should NEVER die.  But it will change, and unless a couple works at it they will end up waking up one day and finding they are more roommates than a couple.

In the early days it’s there because it’s new, we are learning each other, and we are putting energy into it.  When we stop putting in, it fades.  And it’s not the responsibility of one person to keep things “alive”.  Both people in a relationship need to be willing to put the effort in, and prioritize being lovers.

A while back I interviewed a guy who cheated on his wife, and posted the story of his affair.  I’ve talked to a number of people and read a number of stories about affairs, and often the story is similar.

People get caught up in the “routine” side of life and find themselves longing for the “old days”.  They find themselves missing the early stages of love – the passionate side.  And they convince themselves that is “real” love, and they will never be able to find it again with their current partner.  They feel “dead inside”, so they start to look elsewhere in order to feel alive again.

In talking about his affair, he wrote:

I was lonely and dying for attention, which is what led me to look for it elsewhere. I did not do this looking for an affair, but just some attention that validated I was worth something. Then I met the other woman (OW), one thing led to another until I was in a full blown affair.

Affair are like a return to the world of dating, and it’s important to note that they are not real life. Rather, they are a way to escape from the pressures and stresses of real life.

Just like an alcoholic turning to drink, or an addict turning to a chemical high, affairs are a way to escape from reality.  Affair partners meet up in secret, and it’s all about need fulfillment.

There’s no real responsibility; no worrying about mortgages, bills or the kids.  Rather, the relationship with the affair partner is like being on a constant vacation.

Of course, they also destroy lives and do a tremendous amount of damage to everyone involved.

They are also not sustainable.

Eventually, if the affair partners see each other enough the “vacation” will end.  Real life will start to intrude, with issues and responsibilities.  When this happens the carefully constructed facades crumble, and the real person beneath starts to show.  A real person, who has real problems just like anyone else.  And when this becomes apparent, the appeal of the affair is often broken.

It was euphoria when were together and agony when we were apart. This is what fed the illusion that it was such a great “relationship”. The reality was, it was just fantasy land and as I began to see her with everyday problems like us, the less and less I wanted to be with her.  I think I was finally really realizing what I had done. I was seeing that the OW was really just fantasy land and none of it was real. 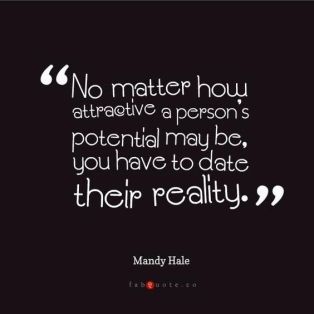 When the fantasy of the affair was broken and reality hit, he found himself trying to understand “why” he did it.  Why he felt such chemistry and passion with his affair partner but not with his wife.  And his answer was simple:

It is a funny question to me now. What did she see that my wife didn’t? I can answer it without a problem. She saw someone who had an interest in them. Who made them feel attractive and interesting. So she never saw me, she saw what I was giving her. So the real question I should have been asking myself was not “What did she see that my wife didn’t?” but “What I am giving her that I am not giving my wife?”

He had chemistry and passion not because of anything special about his affair partner.  No, it was there because of what he put into the relationship.  Time, energy, and effort.  He put that in to his time with his affair partner, and this led to the passion he had been missing.

Fantasy land is just that.  Fantasy.  It’s great as an escape, but it’s important to remember that it is not real life.  And it’s an escape that should only ever occur within the mind.

When the lines start to blur between fantasy and reality, often many lives are affected.

And no matter how great the fantasy world may seem, eventually reality always comes crashing down.

39 thoughts on “Living in Fantasy Land”