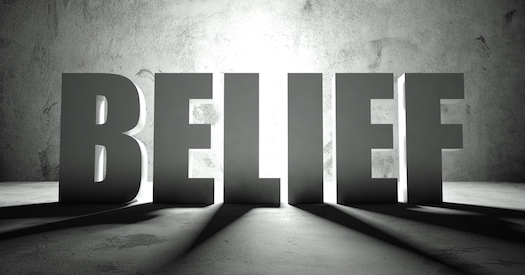 It’s a simple and very powerful concept. Yet it’s also one many people don’t seem to buy into (or “believe”, if you prefer).

Does belief really matter? Can we truly accomplish things simply by believing enough? Or is belief just something people use to delude themselves; a form of false hope?

What is the “truth” behind belief?

For me, I believe belief is one of the most important things we can possibly have. If fact, I feel the core of happiness is being able to believe in all the things around me – my partner, my children, my family, my friends, my dreams, even my job.

Some people talk about love being one of the most powerful forces in the world, others feel faith is. Both of those are founded on belief.

However, belief isn’t some magical thing. As my 9 year old recently put it:

If I believe I can fly and jump off a building, I’ll still be dead.

Umm, yeah. I guess it depends on the height of the building, but for the most part he’s right.

Just to be clear, we can’t defy the laws of physics and there are varying degrees of probability in the world. There’s a difference between belief and stupidity.

Belief is really important though. It allows us to imagine things that we haven’t imagined before, and is a requirement for any sort of changes in our lives.

So while simply believing in something doesn’t mean it “will” happen, it does give it a chance.

When You Don’t Believe

The reason belief is so important is because of what it means when we don’t have it. A lack of belief can be seen as doubt. When you doubt, you question things. You question if something is likely, or even possible. Doubt causes people to hesitate, or to remain passive when they should be taking action.

Even worse than doubt is negative belief – a sense that you *can’t* do something. That something is impossible. Or perhaps a sense that although it may be possible, you could never do it.

Doubting something, believing it’s impossible, or believing that it’s impossible for you ensures failure. It causes people to discount the possibility of something without giving it a chance. Or maybe they do give it a chance, but the doubt causes them to sabotage their own efforts, ensuring their own failure.

Why do people do this? Why don’t people give themselves or their dreams a fair chance?

At its root I think doubt comes down to fear – a fear of failure. We fear failure and we want to avoid the negative feelings that come with it – embarrassment, shame and guilt. So instead, we tell ourselves that something can’t be done, or that “we” can’t do it. After all, if we don’t try then we can’t fail. And if we do decide to try, then telling ourselves this cushions us from disappointment. At some level we *knew* we weren’t going to succeed, so we get the expected result.

We see this all the time with sayings like the following:

I think this line of thinking is so wrong, and runs completely counter to the idea of belief. This thinking involves lowering (or eliminating) expectations on yourself and on those around you. Sorry, I expect more than that out of life – from myself, and from those around me. If you lower expectations, how can you ever achieve anything? Expectations are important, and belief and expectation go hand in hand.

I will acknowledge that expectation opens you up to failure and disappointment, but that’s alright. In fact, it’s necessary. If we don’t allow ourselves to fail, how can we ever learn?

If we don’t suffer disappointment how can we ever grow?

Most of my writing is about relationships, and I truly believe that your most important relationship is the one you have with yourself. To be happy you need to have a sense of purpose. You need goals, and dreams. Simply having goes and dreams isn’t enough though, you need to be willing to act on them. And to do that, you have to believe in yourself.

I read a lot of blogs, and it is clear to me that many people out there don’t believe in themselves. Many people look at the world and see what they can’t do, instead of what they can. Many people seem to believe that they aren’t good enough.

I’m not sure where this comes from, but I suspect a lot of it comes down to what we learn when we are young. I’m a father of two young boys, and I believe as a parent one of the worst things you can do it tells your kids they can’t do something, or try to do too much for our children – doing things for them instead of letting them try. Over time, I believe these sorts of things cause people to believe that they can’t do something. That they aren’t good enough and that they’ll just mess it up.

As parents, we need to let our children try things. We need to be able to let them fail. Our job isn’t to do things for them – that’s not how they learn. Our job is to support them, help them feel good about themselves, and give them the courage to try again.

Sometimes things can seem hopeless, and it can seem hard to believe. Sometimes all we can ever see is failure, and there can be a sense that there’s no point. After all, why put in any effort if you’re just going to fail anyway.

But I never said belief was easy. Belief takes courage, and a willingness to see the best in things and see what is possible in life.

My son is right, belief is not a magic wand. Simply believing I can fly won’t help me if I decide to jump off a building. However that doesn’t mean I can’t fly. A belief that I CAN fly may give me the motivation that allows me to put in the work and effort to find ways to fly.

Many of the things we take for granted today are things that seemed impossible to prior generations. Flight, computers, cars, electricity. There are countless things that would never have happened if someone simply accepted what was possible. For many of the people who impacted the world, belief is what allowed them to keep going through failure after failure.

Most of us won’t change the world. But we CAN change our worlds. We can impact many people around us – our friends, families, and most importantly ourselves.

So have dreams, set goals, and don’t be afraid to expect more from yourself and those around you. Sure you’ll be disappointed sometimes, but that’s alright.

There are no magic wands in the world. Life is what you make it. And to make it what you want you need to put in effort, and you need to be willing to believe in your dreams.

9 thoughts on “The Power of Belief”