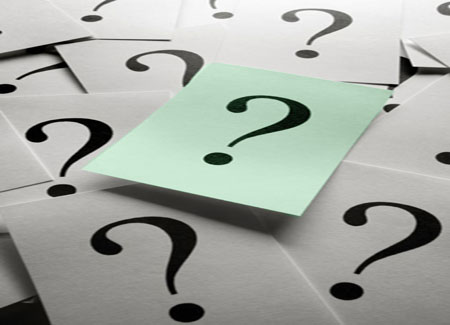 I suspect everyone has gone to see a doctor at one point in time or another.

Let’s say you hurt your hand somehow, and it’s bothering you enough that you decide to see a doctor. What happens?

Does the doctor put your arm in a cast? Does he/she send you straight to surgery to amputate your hand? Do they remove your liver?

You know, while they may ultimately give you a cast or amputate the hand (your liver is probably safe), it’s a pretty safe bet that those (fairly drastic) measures aren’t where they start.

Instead, they start with something simple.

They start by asking why you are there – what is bothering you? Then they ask a series of questions related to your reason for coming in. Maybe they ask when the hand started hurting, and they may ask you to try moving it in different ways while describing any sensations.

I hear complaints sometimes that doctors don’t always “get it right”. But really, if you think about what they have to do I suspect their job is quite difficult.

People go to them with a list of symptoms, and based on these symptoms the doctor has to determine what the underlying issue *could* be. Sometimes there are multiple potential issues matching the symptom list, so they ask additional questions to try and narrow things down; to ultimately find the actual cause of the problem.

What does the doctor base their decision on?

They base it on knowledge gained through years of schooling and experience. We go to them because we trust that they have built up sufficient skills to help us. And if they haven’t, hopefully they refer us to someone who is better qualified.

When we have problems, it’s important that we turn to the right sources. In the example above, the “problem” was a sore hand. For a sore hand do you call an auto mechanic? A gynecologist? No, you need to turn to someone who has knowledge and expertise in the problem area. Even skilled professionals sometimes make mistakes. But by turning to an “expert” we better position ourselves for the best results.

The human body is a pretty complicated thing. But at least it’s tangible. At least you can point to an area that “seems” to be the problem (though due to the interconnected nature of things, sometimes that is actually just a symptom and the real problem lies somewhere else).

When we are dealing with feelings and emotions though, things get much more complicated.

We all have problems and issues that we deal with, and often our hallmark of “good health” is our level of happiness. If we’re happy then things must be going well. And when we aren’t, well then that indicates some sort of issue – right?

Things like issues with anger management or chronic unhappiness let us know that something is not right in our life. So we try to figure things out, or “get by” on our own.

And that’s where we go wrong.

The thing is, we are terrible judges of our own problems because we are too close to them. We can’t see past the emotion of our involvement in order to see clearly. And because of this frequently we can’t see the difference between a symptom and the actual problem.

Sometimes we really have a splinter, and we end up doing makeshift surgery on ourselves – amputating the arm and the liver instead.

One of the areas this manifest itself the most is with relationships. Our relationships are some of the central things in our lives, so if we aren’t happy it’s easy to look at the relationships for what is wrong. All relationships have problems, so once you start looking it’s usually pretty easy to find something.

For most of us, there are a few people in our lives that we are able to turn to when we need to open up and talk about our problem. Ideally our partner is the person we open up to the most, and beyond that it’s usually close friends or family.

It’s great to have sounding boards, and often these people can provide a different perspective and help ground us. Even then you need to remember that they only have your side of the story, and only have what you give them.

If we go in to a doctor and say “I’m sore”, but aren’t able to (or won’t) tell them where it hurts, when it started or what it feels like, they really don’t have much to go on.

Here’s a larger issue though…

…these people have only their own personal experiences to draw upon, and this colors their ability to give you advice. Even if they have been through something similar, it doesn’t matter. Every person is different. Every situation is different. What worked for them or what was best for them isn’t necessarily what is best for you.

Sometimes when there is a problem people have come to conclusions about what is wrong and what they need to do, but a part of them is scared to act. After all, what if they are wrong?

So they turn to others for their “opinions”. But those opinions don’t really matter, because they are really looking for opinions that match their own.

They could get multiple opinions that aren’t what they want to hear, and those are ignored. But when an opinion matches the one they want? Then it provides validation that they were right (that sort of thinking reminds me of this scene from the Lego Movie).
When you have already decided what the appropriate answer is, all the questions in the world don’t really matter.

A buddy of mine was recently divorced, and he’s loving being single again. He had been married a number of years and had a family.

When I asked him what he’s enjoying the most, he says it’s the freedom and the time to himself. He doesn’t have to answer to anyone, and has been able to pick up some new hobbies.

Oh yeah, and he’s started dating again so during his *me* weeks he has to make time to fit in his new girlfriend.

It makes me wonder, is that new freedom real or is it just an illusion? Was it really the marriage that was the problem?

But perhaps it was actually the sense of responsibility that came from going to work everyday and coming home to a wife and children who both put demands on his time.

Maybe he just needed to find a way to carve out a bit more time for himself. Marriage and families definitely restrict you. You aren’t “free” to do what you want. But maybe he could have found a way to get a bit of balance back in his life.

My worry is, if/when he hits the point where he’s either married or living with someone again he will find himself back in the same spot he was in before. And he’ll have broken up his family in the process.

For many people, there is often a sense of relief after a separation or divorce. A sense that “yeah, I made the right decision. I’m happier now”. And that sense really comes from the nature of changing up a stagnant situation.

Often within six months to two years though, people find that their “new” situation is really no better than the old one. Some parts are better, and others worse.

The grass isn’t greener on the other side. Both sides have patches of green and patches of brown. But unfortunately the grass often looks greener from afar, and it’s not until you actually get there that you realize it’s only green where you water it.

When trying to understand our problems, one of the most important things is being able to keep an open mind. It’s easy to have an idea of what is wrong and then latch onto that. But is it the problem? Or it is a symptom?

Depending on the nature of the problem you are dealing with, the consequences of mistaking a symptom for a problem can be considerable.

When dealing with issues that can have serious implications (such as issues with long term relationships or when kids are involved), I would definitely recommend looking into professional counseling services when possible.

Not all counselors are good, and even the goods ones aren’t always a good match for a couple or individual.

But it’s always a shame when someone mistook a symptom for a problem, and amputated an arm when they really had a splinter.

5 thoughts on “Asking the Right Questions”